South African Gastroenterology Society (SAGES) position statement on the use of Radio Frequency Ablation (RFA) for the treatment of Barrett’s Oesophagus.

The working definition of Barrett’s oesophagus (BO) is displacement of the squamo-columnar junction proximal to the oesophago-gastric junction. Chronic exposure of the oesophagus to gastric acid, bile and digestive enzymes results in mucosal injury, which may in turn lead to replacement of normal squamous epi-thelium by metaplastic columnar epithelium. Intestinal metaplasia (IM) is the pre- malignant lesion for oesophageal adenocarcinoma.

Patients with IM typically undergo surveillance endoscopies every 1 to 3 years and multiple biopsies are taken with a view to detecting progression to dysplasia or adenocarcinoma.

Elimination of the premalignant dysplastic epithelium may reduce the need for surveillance endoscopies and the risk of adenocarcinoma of the oesophagus.

Patients with LGD are normally entered into long-term surveillance programs and ablative therapy or surgical resection is occasionally recommended.

A device capable of eradicating Barrett’s epithelium by means of radio frequency (RF) energy has been available since 2005. Over 31,000 patients with BO in 24 countries have treated with RFA in the past 4 years.

Treatment is performed in an outpatient setting and devices causing a 360° and a 90° thermal injury are available. The former is used to treat circumferential and larger areas of IM whereas the latter is used to treat smaller areas of IM.
Patients commonly experience chest discomfort and odynophagia after ablation therapy and, in clinical trials, these symptoms typically resolve in 3 to 4 days.

Patients are normally reassessed 2 to 3 months later and, should there be residual IM, additional ablation therapy may be required.

Clinical studies with the RF ablation system have shown that complete elimi-nation of IM is possible in over 98 % of patients.

Successful elimination of the IM does not cure the pre-existing GORD or asso-ciated symptoms and long-term treatment of the GORD is therefore still required.

Ablation is defined as the destruction and ultimate removal of diseased tissue. In the case of BO, ablation refers to the injury and eradication of all IM tissue and its subsequent replacement by a normal neo-squamous epithelium. The intention of eradicating all IM clones and stem cells, be it non-dysplastic IM, LGD or HGD, is to eliminate or reduce the risk for disease progression, to reduce the risk for cancer-related and surgery-related death and perhaps to reduce or eliminate the need for life-long surveillance.

The pre-ablation work-up must include careful white-light endoscopy of the entire BO segment, categorization of the segment according to its total length, the loca-tion of its most proximal extent, and the location of the gastric folds as referenced to the incisors. Biopsies should be obtained from any visible abnormality, as well as from four quadrants from each 1 to 2 cm level of the BO. Enhanced imaging techniques, such as chromoendoscopy using Lugol’s solution, narrow band ima-ging (NBI), magnification endoscopy, auto fluorescence and high-definition endo-scopy may increase the detection of areas with higher yield for dysplasia and can-cer and lead to more precise staging.

Prior to consideration for ablative therapy, any visible focal abnormality of the mucosa should be resected by means of endoscopic mucosal resection (EMR). This ensures removal of lesions that are too thick for ablative therapy and may detect HGD or occult cancers. In order to allow healing, at least 8 weeks should be allowed between EMR and RFA. In cases of HGD, endoscopic ultrasound (EUS) may be of value in ruling out submucosal or lymph node involvement.

1. The patient is pregnant or planning a pregnancy during the course of RFA.
2. The presence of an oesophageal stricture, which prevents the passage of the endoscope or catheter.
3. Active oesophagitis (Los Angeles Classification Grade B or higher).
4. Prior radiation therapy to the oesophagus. Radiation therapy to the head and neck region is not a contra-indication to RFA.
5. A history of endoscopic mucosal resection (EMR) that meets any of the following criteria
EMR performed less than 8 weeks before the RFA session
EMR performed in a wide field manner (encompassing more than 90º of any area of the oesophagus).
6. Any previous oesophageal surgery except fundoplication without compli-cation (i.e. slippage or dysphagia).
7. The presence of oesophageal varices.
8. The presence of an uncontrolled coagulopathy (INR > 1.3 and/or a platelet count < 75,000/μL)
9. The presence of comorbidities with an anticipated life expectancy of less than 2 years.
10. A known history of alcohol and/or drug dependency that would limit the patient’s ability provide informed consent, to follow post-treatment instructions or to keep follow-up appointments.
11. The patient has an implanted pacing device such as a cardiac pacemaker, AICD or neurostimulator and has not received clearance for RFA by the specialist responsible for the pacing device.
12. The patient suffers from psychiatric or other illness, which makes compliance unlikely.

SAGES will select a number of medical centres throughout South Africa to initiate the RFA Programme. The centres will be selected on the basis of a demonstrated interest BO and oesophageal cancer, expertise in performing advanced diagnostic and therapeutic interventions and the availability of at least 2 expert gastrointes-tinal pathologists with an interest in BO. Sites in Pretoria, Johannesburg, Durban, Bloemfontein and Cape Town are under consideration.

Two gastroenterologists at each centre will be trained in RFA techniques. Each should have demonstrated expertise in advanced therapeutic interventions such as EMR, endoscopic coagulation techniques (argon plasma coagulation, clipping) and oesophageal pneumatic dilatation.

Training will consist of didactic and practical components and will initially be conducted by a professional from the manufacturer or one its appointees. It is foreseen that this function will be taken over by South African endoscopists once a core group has been trained and developed the necessary expertise. SAGES furthermore intends to provide ongoing education in the form of lectures and live case demonstrations.

Proposed lecture material will include the following topics

Monitoring
SAGES will visit participating centres to evaluate the programme and will require regular reports on the outcomes of the RFA program.

Patient Education
Patient education remains the responsibility of the treating physician but SAGES intends to assist this process by developing suitable educational material. 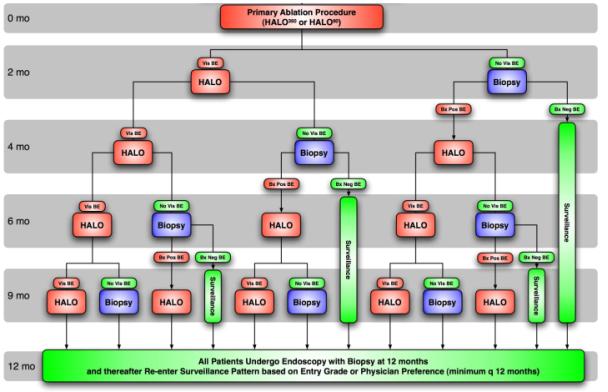